On February 5th, 2011 I found out I was pregnant! Seven home pregnancy tests later, and a trip to the doctors confirmed it, my husband and I were expecting our first child after only one month of trying to conceive. I knew my due date before I even saw the doctor, Oct 19th. and I began counting down as soon as I saw those two pink lines. I was just three and a half weeks pregnant! I was very lucky to enjoy a happy, healthy, and relatively glitch free pregnancy. 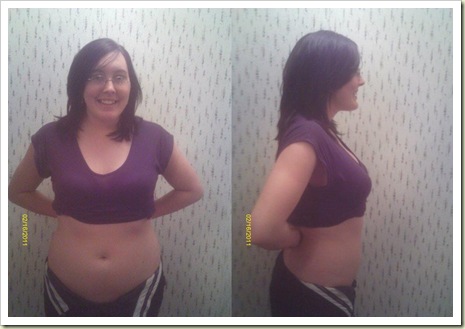 Baby constantly measured bigger than average, and everyone, as they always seem to say to pregnant women, assumed it was twins. At nine weeks I had my first peek at the baby, just one, but I didn’t completely believe it myself until the anatomy scan at 19 weeks. My husband and I were different sides of the fence on gender reveal. I am impatient by nature and wanted to find out and start buying clothes that weren’t yellow or green. My husband didn’t. So we came to the only decision we thought was fair. I’d find out, and he wouldn’t. Needless to say, that didn’t last very long and about a month later, my husband found out his instincts were correct all along (unlike mine); we were having a boy!

We’d chose names before we’d found out the gender, and from then on it seemed time flew by. I saw my little guy again at 28 weeks in a 3D scan, it was absolutely amazing. He was still measuring fairly large, but there was no worry. The third trimester went by fast, looking back on it, but at the time it seemed like it was the longest one of them all. Around 35 weeks I asked my doctor how big he would let the baby get before deciding it was a risk to have him vaginally. It was very important for me to have a vaginal, and if possible, natural birth. With myself being just under 2 foot long at birth, and my husband weighing in at 10lbs 10ozs, it was very unlikely we’d be getting a small baby.

My doctor and I came to the decision that if he was still measuring large, we’d try a sweep at 37 and 38 weeks, and induce at 39. He wouldn’t let me hit my due date, let alone go over. (Thank gosh for that!) So my 37th and 38th week both came and went. My cervix was found highly unfavorable, very posterior, only slightly effaced, and not dilated at all. There would be no membrane stripping for me. The next 7 days were torture, knowing the date I’d have my baby and not being able to hurry it along at all. (Although I was still trying) I bounced on birthing balls, went for long walks, took Evening Primrose Oil…nothing worked. Babies really do come in their own time. Usually.

My induction, or ARoM (artificial rupture of membranes) as they called it, was scheduled for Oct. 12th at 7:30am. I arrived at the hospital, was checked in, and my cervix examined. It hadn’t changed at all, I was so disappointed. They said I could do home, but if I was unable to go into labor on my own, I’d be almost definitely getting a c-section on my due date, by then the baby would definitely be to big for me to have. I’d already been warned if I had made no progress it would pretty much guarantee a longer labor. We decided to dilate my cervix with a Foley catheter. Basically, they blow up a water balloon on the other side of your cervix and over the next few hours it dilated you to about a 2cm. It lasted all of 45 minutes before it came out, my cervix had basically rejected it. They checked me. I wasn’t even a full 1cm. Next step, and the one I was hoping to avoid was the drug route. They inserted Cytoprep, rubbing it directly onto my cervix. The contractions began about a half hour later, they were still manageable, and I was able to walk around the hospital and remain mobile while it worked.

At 1:30pm I was checked again, 4 hours after the Cytoprep had been inserted. I’d dilated to a 2cm, and effaced to about 80%. MY water was broken and again, much to my disappointment, Pitocin was started to up my contractions. My contractions went from manageable to very uncomfortable in a short period of time. Not only was the pitocin amping everything up, but also my membranes being ruptured was doing it as well. I started getting back to back contractions within the next hour or so. 3:00pm came, and I was checked. All those contractions and I had only gained one more cm, they upped my pitocin again, and asked if I wanted an epidural. Yes!

About an hour later I lay in bed, pain free, and only able to feel the pressure of my contractions but not the pains in my stomach and back. I was finally able to rest and I napped on and off for the next few hours, only waking when they needed to check for dilation. Around midnight, my epidural alarm rang, signaling I only had a half hour left of "juice" left. They replaced it quickly and I thought all would be well. 2:00am was when everything got a bit crazy, and it remained crazy for the remaining three hours hours.

Everything that could happen, happened. First, my epidural began only working on one side, they adjusted it, gave me narcotics into my IV and still, I was feeling the contractions. Then, my epidural completely stopped working. I was no longer only feeling the pressure of the contractions but the pain in my sides and back were also returning. I was told I was 9cms, stretching to 10 with contractions and it was time to practice push After several back to back contractions (feeling every bit of it) they decided I was making no progress and tried a few different positions. sitting straight up, laying on my side, etc. Nothing was working. He would come down only so far and the second I stopped pushing he would retract back up.

I refused to push, I thrashed around, I cried…. it was nothing like the calm atmosphere I’d imagined. The urge to push was intense, and soon I couldn’t fight it, my body was pushing even if I didn’t want to. It helped the pain, SLIGHTLY, to push, so I did. I was getting 2-3 back to back contractions lasting minutes. With each contraction I was pushing 4 times. I remained in this state until about 4:30am, finally my doctor was called in, and he informed I was making no progress, he said the baby was to large for me to push out by myself, he would have to use the vacuum.

At this point, I just wanted to not be in pain anymore, and honestly the excitement that I would soon have a baby was very dim. I couldn’t even think about it, I was in that much pain. So with the next two contractions he tried to get the baby out with the vacuum. He was to big for even that. It kept pulling off his head. They’d given me an episiotomy for the vacuum, so when they told me they were going to have to use the forceps, I didn’t imagine it would be much worse than the vacuum. The next contraction came and with two very intense, long pushed and two pulls from the doctor, my baby 8lb 14oz baby boy was born screaming. The clock read 5:13 am, almost 22 hours after I’d originally been induced. 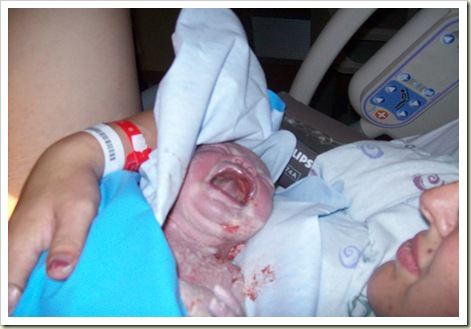 I ripped, had to be repaired with no pain medicine, and lost enough blood to warrant a transfusion. But, as all birth stories end, the second I held him, it was completely worth while.

A big thank-you to Michelle for sharing her amazing birth story with us!

If you would like to share yours, please email your story and 3-4 pictures to detroit.mommy (at) gmail (dot) com