This post was sponsored by the Role Mommy Writer’s Network.  All opinions are my own.

You might not know this because I haven’t talked about it too much but I’ve made some really big changes in my life recently. I’ve started exercising on a regular basis & eating smarter in attempts to go back to pre-baby weight. YES all 3 babies! So far I’ve lost 10lbs. 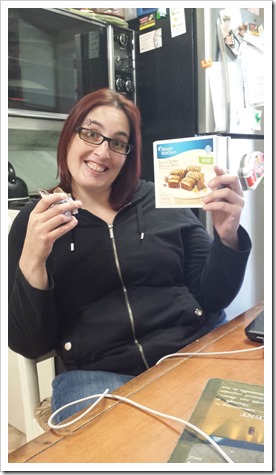 I put them to the test by offering my friend Dana one. Dana has been a vegetarian for the past 20 or so years so these were perfect for her. Not to mention she’s very particular about what she eats as she had a big weight loss herself in the past few years.

I didn’t tell her who they were from as I had been sent a disguised package. She loved them. You can see her expression in the picture when I handed her the real box & showed her who makes them. LOL. She was a good sport about it.

We both agreed that the Peanut Butter Brownie Bliss brownies have a real peanuty flavor. More akin to peanuts & not actual peanut butter, although the inside is creamy & smooth.  I don’t know how they did it but whatever they did it works.

Of course the Triple Chocolate Brownie Bliss brownies are just as delicious! Thankfully both varieties of Brownie Bliss contain zero grams of trans fat & at only 80 or 90 calories they’re perfect size. Just enough to satisfy your sweet tooth & best of all there’s no guilt after! Make sure to keep an eye out for them at your local grocery store.

Disclosure: This post was sponsored by the Role Mommy Writer’s Network.  All opinions are my own.