“I was considered a very high risk pregnancy. We had lost a little one at 24 weeks prior, with no real reason ever determined.We had no real birth plan other than getting to 28 weeks (the point at which survivability is 95%) So, at 31 weeks we moved closer to our hospital. By this point, I was already on light duty, not allowed to lift anything heavier than my 6 pound kitten. At 31 weeks I had contractions so spent a night in the hospital and was given the exceedingly painful steroid shots to help with lung development on the tiny one inside.

At 32 weeks, I began to leak a mysterious fluid, but this week I saw the NP at my doctors office as my doctor was out of town, so she dismissed this. I brought it up with my doctor the following week, who immediately checked it, said “”oh dear, that’s not good, you’re leaking amniotic fluid””. So off to the hospital I went. Two days later, after discussing with my doctor whether the advantages of baby staying in outweighed the risk of him getting an infection, it was decided to have him delivered by c-section that day (because, of course, he was also breech!)

After a LONG day of no food or water, i was taken in to the surgery room. I remember being nauseous from the meds, and my husband’s horror when they asked if he wanted to see the c-section. His response was ” I don’t want to get THAT intimate with my wife.” Now remember, my pregnancy was only 33 weeks, so they were expecting a preemie sized baby. And my doctor made the incision knowing he was a preemie. And then I hear “”uh-oh””. Never a good thing to hear during a surgery. Turns out they were having issues getting him out, as he wasn’t so preemie-sized. Once he finally cooperated with the doctor, I was petrified. He didn’t cry right away. There was just silence. And then I hear a nurse say “” Well, he peed on me””, and he began to fuss at them. And I laughed, because if he was crying, he was breathing.

We got to see him briefly before he had to go to the NICU and be checked out by the neonatologist, and he already looked so much like my husband. There was absolutely NO doubt who was the daddy. It was several hours later before we were able to go see him in the NICU, and seeing him in a isolet with wires monitoring him and an NG (feeding) tube, was a shock. The nurses joked with us that he’d never be lost as he was the only 7 pound, 22 inches long, 33 weeker that the NICU had ever had. Thankfully his lungs were fully developed and he only had the feeding tube for 2 weeks before he ate on his own. We spent hours a day at the NICU. We came to know his nurses quite well.

At 35 weeks he moved to the step-down unit, or the area where babies are no longer required to be isolated and are just growing and making sure they can eat to go home. At what would have been 37 weeks, and was the week before Christmas, we took him home.

The one moment I will never forget, is that stillness, that waiting for that first cry, and then the sheer relief on hearing that indignant scream. “ 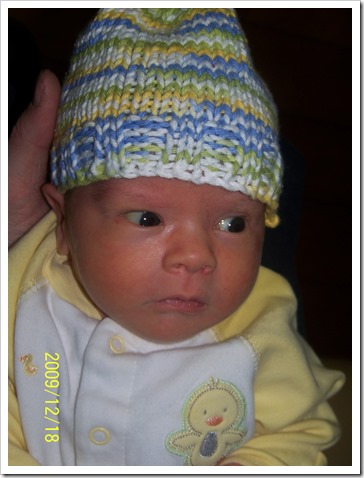 A big Thank-you to Sarah for sharing her story with us!