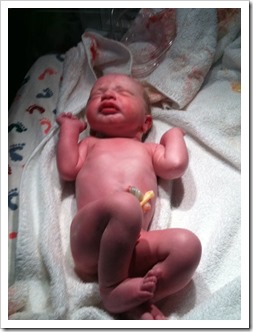 “Hello mommys! My story starts with a prenatal check up. My blood pressure had been going up and down since I was 20 weeks, I’d had to collect my urine in a bucket for 24 hours two separate times. It was pretty gross. I had tons of blood tests done. But other than all of this, I’d had a pretty easy pregnancy (no morning sickness, mild cramps, mild swelling, very few hormone induced fits of rage…hehe).

My husband and I (he insisted on going to every appointment, aren’t I lucky!) went to my check up like normal. Yet again, my blood pressure was not cooperating. I was 37 weeks, miserable, and diagnosed with pre eclampsia. My doctor told us the best thing would be to go ahead and get that baby out (yippeee!!!). I was in complete shock. We were not ready to have a baby in a week. There was SO MUCH we needed to get done and of course I was put on bed rest until D-day. JOY! I was hooked up to the band they put on your belly to monitor baby’s heartbeat and I was told to push a button every time baby kicked.

Meanwhile, my husband is calling every family member and friend to tell them the news. My mom is making plans to be in town and freaking out almost as bad as I am. It was so overwhelming, I nearly passed out. My head was spinning, I felt like I was gonna hurl. After I calmed down they let us go home to start preparing. And boy, did it get chaotic around my house. 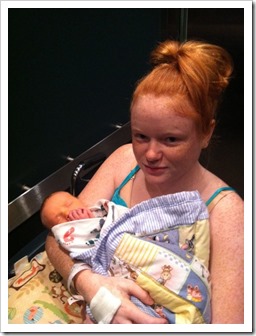 A week later my sister, her boyfriend, my mom, and I made our way to the hospital at 8pm, but not before sneaking to taco bell for a couple of those amazing pina colada drinks they have (my biggest craving). My husband was at work and didn’t get off until 10pm. I got signed in, got my pretty little hospital bracelet, signed my name on a TON of papers, and was finally put in a room. I put on my hospital gown and was told to let the nurse know as soon as I was done doing my enema….say WHAT now?!??? Honestly, that traumatized me more than the epidural or anything else most pregnant women dread. And it was terrible. I made my loving, nurturing, extremely patient mother do it because I just couldn’t imagine doing that to myself. It took a while to get that part done and over with.

After the enema the nurse returned with more paperwork but this time it was for baby. Birth certificate, etc. And to ask me a million questions like if I was happy at home and if I was in an abusive relationship, get a count on all my tattoos/piercings/other body marks. After that was done, a nurse came in and put two pills in my vagina. I don’t remember what they were called but she said they were to soften my cervix. I thought it would hurt but it was nothing. They also kept a close watch on my blood pressure, which was still acting up. They put an iv in my hand (EXTREMELY PAINFUL and scary looking) to start Pitocin. Two different nurses had to stick me about 6 or 7 times in BOTH hands before they finally found a vein. At this point I was ready to go home and try again another day. 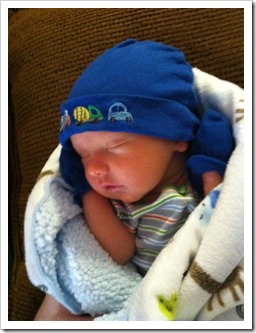 After those nightmares were over, my husband finally got there. He was upset that he’d missed all of it but he’s lucky he did. I wasn’t a happy camper. The nurse gave me Ambien to help me sleep. I passed smooth out for part of the night. I woke up early in the morning, about 5am I believe, to everyone being concerned about my blood pressure. They hooked magnesium up to my iv to bring it down. That stuff is the devil. It worked for the blood pressure but made me feel like I had the flu on top of contractions and everything else. I really just wanted a couple shots of vodka more than anything.

I don’t remember how much I was dilated at this point but I know when I got to the hospital I’d been at 1cm for a week. They sent for someone to come break my water, which terrified me because I’d been told that it’s pretty painful when someone else has to do it. While we were waiting for them to come I felt the need to pee worse than I’d ever had to pee before in my life. I announced to everyone in the room that I had to pee and I had to do it NOW. They weren’t quick enough, the bed was soaked. I said “”Well, too late!!!””, thinking I’d just peed myself in front of a room full of people. I knew it wasn’t right, though. It was wayyy to wet to just be urine. My water had broke on it’s own and I was ready to do a happy dance.

My water broke at about 7am. From then on I was forced to lay in the bed on my left side and my left side only (apparently that was supposed to help with my blood pressure, too). But did I listen? Nope. I got in trouble if a nurse walked in and I wasn’t on my left side. The contractions started to get stronger. They weren’t unbearable just yet but I could tell that’s where I was headed and fast. I asked for the epidural and prayed it wouldn’t hurt too bad while I was waiting. My sister is a studying to be a nurse so she loved every bit of this. She was in heaven. Surprisingly, the epidural was painless and easy. No big deal. Hallelujah!! Things were finally looking up.

At about noon my doctor came in to take a look and announced that we should have a baby within the next couple hours and she was right. At about 2pm it was time to start pushing. There were nurses getting everything set up, putting my legs in stirrups, setting up the table where my little bundle of joy would be placed. My sister got really emotional all of a sudden. She knew that she was about to have to leave the room and she hated that (so did I). The nurses saw us being huge balls of emotion and, with tears in their eyes, told her she could stay. I was lucky enough to have my husband, my mom, and my sister all right there with me. 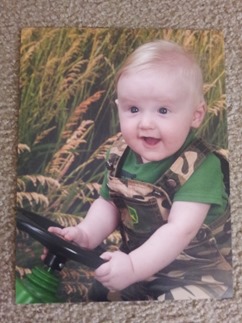 I pushed. And pushed. And pushed. And pushed. And pushed. And just when I felt like I couldn’t take anymore, like my body was just about to give out, that little head popped into view. My sisters face was priceless, I’ll never forget it. I’ve never seen her look so terrified, especially when she watched the doctor reach for some scissors to cut me. Which I didn’t feel at all but I knew exactly what was happening by the look on her face. And finally, he was here. My beautiful baby boy. Screaming, and covered in my insides. Everyone was crying except me. I just couldn’t stop looking at him. He was the most gorgeous thing I’d ever seen (and he still is). I pushed out the placenta while they were cleaning up my baby and giving him his shots. I was stitched up, which was quite painful. He passed all his tests and he’d won everybody’s heart. That night was pretty peaceful but night #2, I’m not sure how I survived. He’d been circumcised and every time he peed, my heart broke. We went home on day 3.

My little man is 6 months old now and I just can’t believe how fast time flies. The pain after leaving the hospital was horrible. Every time I sat down I felt a jolt of terrible pain from the spot where the epidural all the way up to the back of my neck. It finally stopped after about 3 months. My nether regions healed nicely. My labor started out in a pretty terrible way and slowly got better. But what really makes it all worth it is when that little boy looks up at me and just laughs for no reason other than me looking right back at him. He’s the light of our lives and my whole entire world.”

A big Thank-you to Kody for sharing her story with us!