“In honor of prematurity awareness day, I wanted to share my daughter’s story! The story of my daughter’s journey into this world is so fresh in my mind. It was months ago, yet everyday it feels as though it was just weeks ago. Our journey was long, a journey filled with so many ups and downs, a journey that showed us miracles happen everyday. The beginning of this journey all started in February. As a superstition, I always took a pregnancy test when it was ‘my time’ because I believed it brought on my period. However, this particular time that isn’t what happened; it came back positive instead of my always faithful negative. I was with my husband when we found out, and I can just remember how in shock, afraid, and amazed we were. I had wanted to wait years before I had children because I didn’t feel as though I was ready. I was raised by my grandmother, who I called mom, and she had just passed away on December 25, 2011. Without her, I felt raising a baby was impossible. But, here I was pregnant with no other options.

As the months went on I began to accept my pregnancy. My husband was a Marine at the time, and I was a waitress. We lived in Jacksonville, North Carolina, and we lived a happy life. In May, my husband was granted an early release from the military, and we decided to move to Louisiana to be with his family. We made our final visit in April to West Virginia to be with my family, and we made our way to Louisiana on May 25, our one year wedding anniversary. Life in Louisiana was good. I found a new doctor, Aj was job hunting, and we were so happy. In the early weeks of June however, the joy faded. I missed our old life, I wanted to be with my family, and I was having a hard time out of my sister. I felt I had prepartum depression and planned to talk to my OB. On June 14, I went to do the oh-so-famous sugar test, but I never had the chance to speak with my doctor. I figured I’d catch him next time. Sadly, that was not what would happen.

That weekend, we went to stay with my husband’s ‘meemaw’. On June 17, I woke up with awful back pains. We had slept on a new bed, and boy did it put a hurtin’ on me, I had thought. Then, I started feeling this odd pain in my lower abdomen- my lower, lower abdomen. I am a ‘Googler’, and immediately began reading about preterm labor. I brushed it off, blamed it on that darn bed, and left it alone. After an hour, it became much worse. I called my doctor and was told to come to the hospital. I was two hours away, and I was not about to make that trip for nothing. So, I waited… and waited… and waited.

About midnight, I began timing these pains. They were hurting much worse than earlier, about a 6 on the 1-10 scale. They were 6 minutes apart, and I became worried. I went to the local hospital, also known as the ‘bandaid station’, to make sure I wasn’t dilated. The doctor refused to check because she wasn’t in distress, and gave me a shot of pain medicine. My pains were still happening, so my night consisted of a long, painful night with me high from that shot. 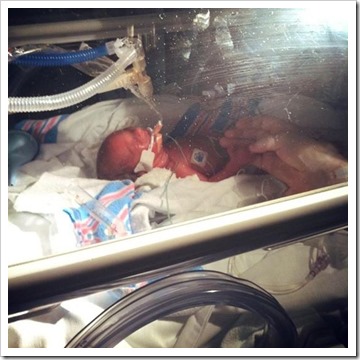 On the next day, June 18, my life changed forever. I woke up with pains much worse. Again I called my doctor, and again I was told to come in. Being the know it all that I am, I figured out that it was Braxton Hicks contractions. I decided to let my husband drive me on to the hospital, the whole two hours away, so I could be given Ibuprofen. At 1 P.M. we headed to the longest ride of my life. Every few minutes I was squeezing my eyes shut, lifting my rear end off of the seat, praying the pain would hurry and pass. It was nearly unbearable. When we arrived and headed to labor and delivery, I can remember a sweet lady offering a wheel chair and wishing me luck with labor. Me? In labor? I sure didn’t believe so. Once we arrived to the labor and delivery floor and they hooked me up however, it did show I was indeed having contractions.

An hour later, roughly 4 pm, they came to see if I was dilated. That was by far one of the worst pains I had felt up to that moment. When the nurse informed me I was already at 5 centimeters, I was nearly speechless. I asked if I should call someone. Was I having my little girl then? I didn’t think a 26 week baby could make it. I just could not give birth yet! I was given medicine to slow my labor, a shot to help develop her lungs and a catheter was put in. They made plans to send me to a hospital two hours away, and Aj and I began to wait, hoping this would stop. Willing our little Allison to just please stay inside. 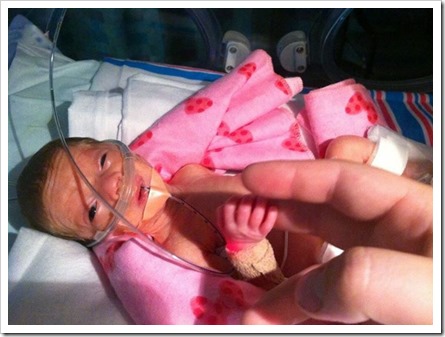 Twenty minutes later, the ambulance was here to take me. They were in my room, ready to load me up. The contractions had slowed, but they were so painful. I just had this feeling, something kept telling me not yet. Do not let them take you. Because I was so early, the nurse didn’t want to have to check to see if I was dilated more than necessary. They had slowed, so she believed labor was stopping. Even though I trusted her, I just couldn’t go. I begged her to check me once more. When she finally agreed, I was completely dilated, and the baby could not wait any longer. It was time for me to deliver.

My OB arrived, and everything was such a blur. My baby was coming, and all I kept thinking was she wasn’t going to make it. How could I get through this? My husband called our families to let them know what was happening while my catheter was removed and we were getting ready for this. I was offered an epidural, but my contractions were so bad I couldn’t stay still to receive it. Everyone was in and out, preparing for what was about to take place. It was almost time for him to break my water, and  before he could I said a prayer. I prayed for this to go smoothly, I begged God to forgive my sins and to give me my baby girl. I asked if it was to come down to it, please let me go instead. I could not lose this baby. I just couldn’t.
He checked me once again, broke my water, and shortly after I felt I needed to push. Feeling my water break was unforgettable, it was a waterfall coming from inside of me. It hurt so, so badly. I screamed, started holding my breath. At first I was just in shock at how badly it hurt. I had to push, and I had to get through this pain. I began my breathing. I knew I needed to begin to push. I bared down and pushed as hard as I could. Finally, at 6:36 P.M. it happened. She was here, she was no longer inside of me. She was alive! She let out the most beautiful scream, I’ll never in my life forget that very moment. Jesus had saved my baby. He had given her to me. I was now a mommy. 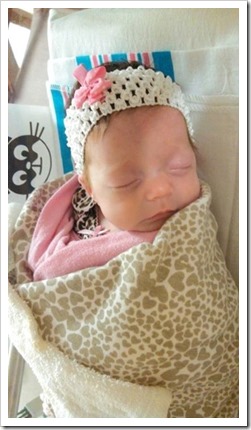 Allison Joyce was barely two pounds, and she had to be rushed to the NICU. Family visited me, but I couldn’t visit Allie until that night. At 10 P.M. I finally saw my baby, and she was breathtaking. I spent my entire night by her side. She was my little girl, my little fighter.

On June 21, she came off of her ventilator. That’s when I knew she was going to be so strong. On June 25, I held her for the first time. It was one of the proudest moments of my life.
On July 10, my birthday, she had to have her first blood transfusion. That was incredibly scary for me. Her heart rate kept dropping to the 40’s, and she couldn’t produce enough blood to keep up with the amounts they had to take.
On July 11, she was a whole new baby. She was doing much better, and we were able to hold her again!
On July 25, however, my little angel almost didn’t make it through the night. She was just so tired of trying. She almost gave up, even her nurses believed it was ‘that time’. Thankfully, my sweet girl kept fighting. She kept fighting because she knew how much her mommy needed her. She knew her mommy could not go on without her. So she fought, and she fought hard.
On August 09, she completely came off of any type of breathing assistance. She only needed a little help when she would get upset, but other than that she was on her own! We actually began planning her coming home date, and we were just so happy!
On August 12, she developed an infection that the NICU thankfully caught in time. It had made her sick again, she couldn’t breathe on her own, and her heart rate was dropping. They did the blood work, and found the infection before it became much more severe. The antibiotics were given, and she was back to herself!
On August 13, her coming home date was pushed back, we were told to expect October. My heart sank, but there was just nothing I could do.
On August 30, she no longer needed her feeding tube.
And on September 07, she finally came home! 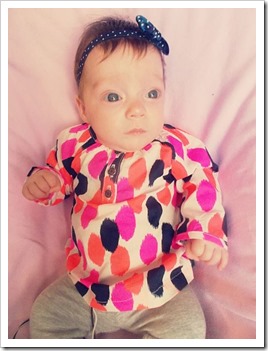 The NICU journey was a rough experience. I’ve seen the nurses have to do things to her a parent should never have to witness, but I refused to let her go through this alone. She was fighting for me and I was fighting for her. She is now almost 5 months old, but developmentally she’s only almost 2 months. She currently has a heart monitor, and she takes Zantac, Prevacid, Caffeine, and Iron. She is now 9.3lbs, and she is so big now. She is my amazing little fighter, and I will always cherish every moment with her, especially the moment she made me a mommy.

Our story of our experience is a long one, but I love sharing it with as many people as I can. I had always dreamed when I went into labor I would be home, with my husband, and my water would just break. We’d rush to the hospital, and it would happen. Though our story isn’t like I had dreamed, I wouldn’t change it for the world. my little angel may have came too soon, but she is so strong! She is truly my miracle baby! ”

A big Thank-you to Brittany for sharing her story with us!