Looking for the perfect cupcake to compliment your Easter celebration that’s healthy to boot?  Thanks to allergy-free/vegan chef Debbie Adler (as seen in the Los Angeles Times), there’s a safe (and sugar-free) Carrot Cake Cupcake recipe that is a great way to say Happy Easter!

Her recipes were developed out of love for her son. At just three-years-old, he nearly died from an allergic reaction to frozen yogurt. That’s when she transformed her bakery to offer goods that are totally safe for anyone with food intolerances.

Thank you to Debbie for sharing her recipe with us today 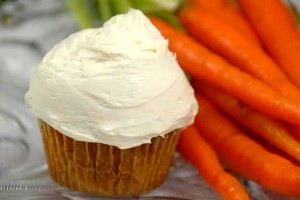 Are you saying “no” when your kid asks for a cupcake at a party? If so, Debbie Adler has a cupcake for you. In fact, the sweets out of her L.A. bakery and cookbook actually make you feel good. With her own son allergic to “every food in the USDA pyramid,” Debbie took matters into her own kitchen. (Without any ambitions of Food Network stardom, she was inspired to become her son’s allergen-free Iron Chef as well as create a bakery so that children like her son, as well as those with diabetes, celiac disease and autism, could safely enjoy mouth-watering and nutritious desserts.

Today, her popular bakery has Hollywood’s A-list celebrities (including Gwyneth Paltrow) and customers nationwide phoning in orders of her delicious, nutritious muffins, brownies, cookies, cupcakes, donut holes and breads. In Sweet Debbie’s Organic Treats, Debbie reveals why she uses nourishing grapeseed oil and coconut oil, why it’s best to sweeten with zero-calorie stevia and mineral-rich coconut nectar and how her gluten-free flour mix packs an alimental punch. The book is a treasure trove of valuable tips, tricks and intimate details, and Debbie shares all her delectable secrets for 50 treats like Irresistible Red Velvet Cupcakes and Cosmic Chocolate Chip Cookies.

Debbie Adler opened her allergen-free, vegan bakery Sweet Debbie’s Organic Cupcakes in Los Angeles in 2006. She has appeared on NBC’s evening news, and has been featured in Pilates Style magazine and on InStyle online and E! Online. Her recipes have been published online by Food Allergy Research and Education, The Chalkboard, Life Goes Strong and AllergyMoms.com. She is a graduate of Binghamton University and was a CPA for a large accounting firm in New York City until she realized all she wanted to do was count to a dozen. She is now the chef and owner of Sweet Debbie’s Organic Cupcakes, which caters to celebrities, Hollywood studios, large food companies and customers nationwide. She lives in Los Angeles with her husband and son. Visit her website at www.sweetdebbiesorganiccupcakes.com.