Saying Goodbye To An Old Buddy 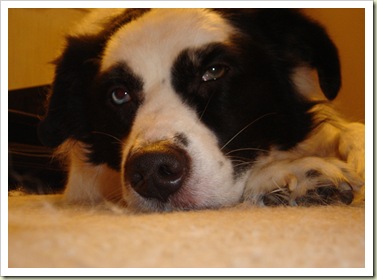 Some of you remember my dog Bailey that you seen a picture of not too long ago. Unfortunately Wednesday I had to have him put down. It was one of the hardest decisions I have ever had to make. In fact I had preparations to do it for a while now but I just couldn’t go through with it.

After 13 yrs my poor boy was going senile. It was getting progressively worse over time. On top of this he seemed to be losing his hearing. I could be 2 ft from him when we were outside and he couldn’t hear me calling him. Although he loved going outside he recently started barking not 2 minutes after being out. He also started almost going insane when it would rain. It used to be he was scared of thunderstorms but then it got worse and even if he heard it raining he would have an accident on the floor. One night when it was storming heavily he actually barged into our house (he slept on my enclosed porch) and he walked into my bedroom where the kids and I were sleeping and he pee’d right next to my son’s bed. 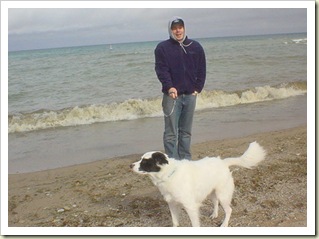 There was also the fact that for some reason my 3 yr old started being deathly afraid of the dog. I think he may have nipped at him or growled because my son used to love spending time around the dog. Just last week I was on the porch cleaning and my baby walked out there and my 3 yr old screamed at the top of his lungs and started pulling the baby in the house saying “No he going to bite my baby!” and I mean screaming, bloody murder. I thought for sure someone was going to call the police. I have never seen my 3 yr old act so scared.

Then just the other night it had rained again and Bailey went wild out on the porch. He could always come inside the house if he wanted by pushing the door open but when I woke up in the morning I found his hair in clumps all over the porch and he was in the corner, behind a ladder, hiding. The floor was wet and he was laying in it. 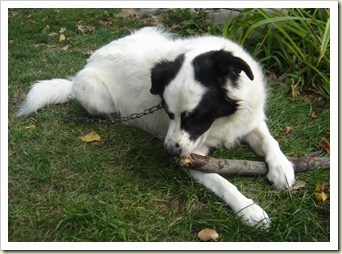 Hanging Out In The Yard

It was this behavior that led me to take him to the vet a few months ago. They checked him out and said his health was fine, although he had lost 20lbs in the past 2 years. (He used to be sorta chubby). The Dr. talked to me about him being senile and gave me some options for medication. Yeah apparently they have something similar to Alzheimer’s medication for dogs! You buy it at the human pharmacy too. It was at that visit I couldn’t go through with having him put down. I brought him home and I tried these past few months to change some things and make his life a little easier, unfortunately it didn’t work.. time only made it worse.

Soo… here I am now. I’m feeling so lost without my buddy Bailey. He was my best friend for so long. Before I was married, before I had kids.. he was there with me, always my friend, always waiting for me. I used to cry when I had to leave him with friends when I’d leave the country. Everyone used to tell me to get rid of him and I watched a lot of my friends/family go through numerous animals.. but I kept Bailey by my side. I made a commitment to love him the rest of his life. Heck, he even drove all the way to California with me one time. Sat in the front seat awake and looked out the window the whole time! He literally went everywhere with me.. and everywhere he went people told me how beautiful he was.

He had the most awesome eyes, one blue, one light brown.. and he was very smart. He knew how to crawl, give high-fives, help us pick up sticks from the yard.. but most of all he was a great cuddler. He was like a big stuffed animal. 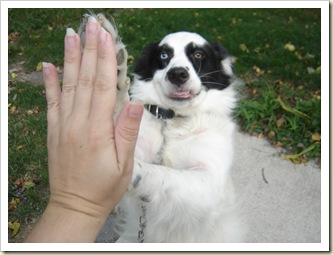 Bailey Giving Me A High-Five

I’m just so sad these past few days. I wake up and look out on the porch and he’s not there. I think I hear him barking or whining but it’s not him. My son keeps asking me if he’s coming home and telling me he misses his doggy. I just feel so empty inside. Maybe if we had a fenced in yard, or a bigger house, or a different place for him to sleep… I keep thinking about all the ways I could have prevented what happened but I know in my heart that none of those things would have changed anything. He was old and nothing fixes old age. I never thought this would hit me so hard. I really miss my friend…

I’ll never forget you Bailey and all the love you gave me. You were my first “baby”. You were there when no one else was. You were such a sweet boy. You will never be replaced. I hope your life with me was a happy one. Until we meet again baby. I love you. 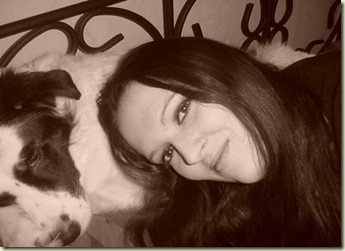 Me & Bailey during happier times