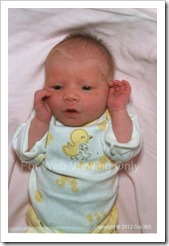 “It was late at night my boyfriend and I had just laid down to bed after making love. I had went into the beginning of contractions (no stronger than my period cramps) I had decided to go sleep on the couch, Morne had gotten up around 5:30 to go to work. I had woken up long enough to crawl back in bed. I had finally woken up around noon. I was hurting pretty bad so I had called my mother and asked her what could be going on. She had told me I was possibly going into labor and if I had the contractions last longer than 45 seconds than I should go on to the hospital. I had decided to wait for my boyfriend to get home from work which had been around 8pm that night.

We had talked and decided to take a bath to see if the contractions would calm down because by this time I was in pretty bad pain. Morne had decided to go to ahead and call the drs. They had said drink about a gallon of water and see how I felt. By the time 11pm rolled around I had told him it’s time to go to the hospital.  He wasn’t quite sure if it was really time and had asked “” Do you think you can wait till tomorrow””. Lol!!! I told him no and we had to drive a hour away to get to the hospital. By the time we got there and they checked everything they told me I was staying the night. I was 4cm and the contractions where strong and long enough. 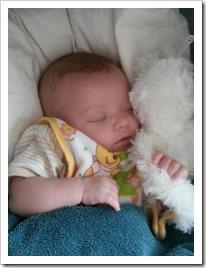 I was not happy at all I was in such pain I was screaming and asked for the epidural. They told me no not yet and that I could take a shower instead, so I had got up & took a shower. And by the time I got back they checked again I had only got to 5cm. In the morning I was in such pain I was puking, they finally said I could have the epidural. They checked again by the time it was done being put in and had time to kick in & I was at 8.  They told me in a few hours I would give birth.

Around 8am I was ready to push and the obgyn came in broke my water and went to get more prepped for the birth. I ended up having her pushed out by 8:20. I took my first look at my wonderful baby girl when she came out I burst into tears, I had never been so happy in my life. They took her to go get cleaned up and my boyfriend followed them around with her while they cleaned me up.They kept her in the nursery to get her warm and he came back told me he had to go to work. I gave him my kisses good bye and waited for my little angel wrapped in pink so soft and warm to come back to me. She was just the most beautiful baby in the world to me. And I couldn’t wait to have her back. They brought her back to me thirty minutes later and said she was hungry. I held her close as I breast fed her. She had spent the whole day and night with me. 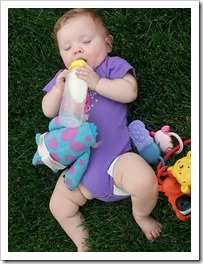 They took her again to make sure she was ready to come home and her jaundice levels was very high and told me we would have to stay another day while she sat under the light. I was mortified because I couldn’t stand being away from her. I went to the nursery every few hours to check on her and cried every time I seen her with the little wires on her and not being in my arms.Finally the next day I got to take her home and was instructed to make sure she got some sun light. As we got home I grew even more excited because I was able to relax and hold my baby girl and not have to worry about any one coming to poke her wit needles or take her away from me.

Now that little baby I had is 10 months old and weighs about 18 lbs. “ 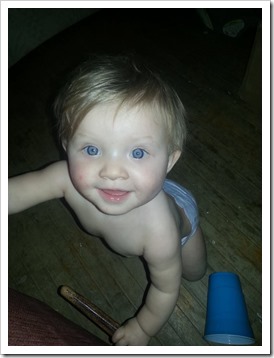 A big Thank-you to Tiffany for sharing her story with us!