After 2.5 years of trying and being on fertility pills we found out we were expecting in March 2012, I couldn’t stop crying I was so happy. 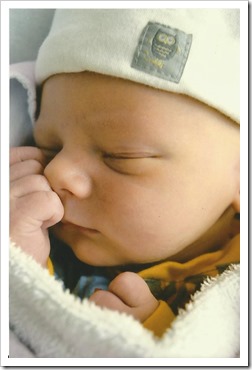 I woke up to go pee around 6 in the morning and I started to lose my ‘plug’.  I was so excited and scared, thinking ‘this it it’!  Well it wasn’t.  As a friend told me it could take a few days to a few weeks for the baby to come after losing the plug. I went to see my OBGYN for my regular scheduled appointment.  He said I was 1 cm dilated, which was normal.  But that didn’t mean I was going into labour anytime soon, so he told me to schedule another appointment with his secretary.  So that day went along normally, with me constantly thinking about it.

I woke up around 3 in the morning with intense cramps, like I usually get with menstruation.  I couldn’t go back to sleep I was so uncomfortable.  I called the maternity ward at the hospital and they suggested taking a warm bath, try not to think about it and relax.  Well I had the bath and it didn’t help.  Still no sleep when my husband woke up at 6:30am to go to work.  He didn’t want to go in case something happened, but I told him to go.  I would call if anything did happen.  I preoccupied myself by watching TV, as the cramps got more painful.  My husband called at 12pm to see how I was doing, and it wasn’t good, so he ended up coming home. By 1:30 I just couldn’t stand it so he took me in.

They took me to triage at the maternity ward to do some tests.  Well I was only 2cm dilated and my contractions weren’t long enough so they sent me home.  They told my husband to call if my contractions were longer then 45seconds.  By about 6pm I was in so much pain and pacing everywhere but my contractions were still only 25-30 seconds.  My husband couldn’t take it anymore and said he was taking me in.  I was scared to go in thinking they would send me back.

So we get there at 6:30pm and once again in triage.  I was so happy when they told me I was 6cm!!  So I was set up in a birthing room. I was told I was doing a good job of breathing through the contractions, but I didn’t feel like that. I was asked if I wanted an epidural and I said YES!  Well the anesthesiologist was on call so they had to call him in, while I waited they gave me nitrous oxide (I didn’t use it too long, it made me dizzy).  Guess there was some confusion as to who was on-call, because it was 30-45 min before he showed up.  I was nervous about getting the epidural before I went into labour, but I was too busy concentrating on the contractions to notice the needle.  So it was in, I was feeling the relief and the doctor broke my water.  The nurse noticed some meconium in the fluid so the doctor got called back (not my regular OBGYN by the way).  He requested I be given Pitocin to speed labour up (I still wasn’t having long contractions) and he had to break the rest of my water.

Shortly after midnight I was ready to push, my sister and her wife went to wait in the hall and my husband still stayed by my side.  I wasn’t having strong or long contractions at all and it seemed our baby couldn’t make it out by himself.  So they tried the vacuum method.  Well after they went through 2 and it still kept slipping off my baby’s head, they decided to do forceps.  So you know what that means, I was cut. 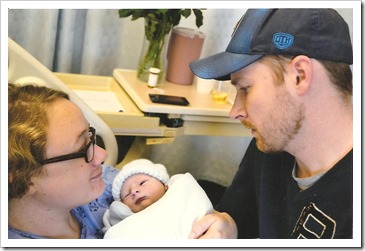 At 1:34am our beautiful baby boy was born.  Sadly I only got a rare glimpse of him.  Because he had meconium aspiration, they respiratory tech had him and was doing tests.  After all the tests were done, and he was washed off and bundled up they took him off to the nursery.  My husband went down with him. Once I was all stitched up my husband came back, he ended up going home for a few hours sleep.  The pediatrician came to tell me they were keeping Zachary in the nursery overnight while they monitored him.

9am my husband came back, so we went down to the nursery to see our son (I was so sore but happy).  Seeing him for the first time made my heart burst! They practiced breast feeding with me and him, but I wasn’t getting anything (I had breast reduction surgery in 2008 and there was a good chance I wouldn’t be able to breast feed, I was really hoping I could). They kept him in there until after noon, when his xray came back good. We had a few visitors, but they didn’t stay long.  Nurses came and showed us how to change a diaper.  It was all very exciting.  Then night came and Zachary was screaming.  He was fed, changed and bundled up but he wouldn’t sleep.  So the nurses took him for a few hours so we could sleep. 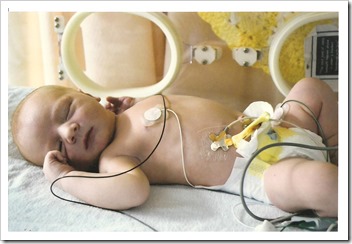 It wasn’t a good night.  Our poor boy was in distress and no one knew why.  So they took him off to xray his chest again.  They come back to tell us he had a cracked collar bone, likely from the forceps.  So they gave him some Tylenol and binded his left arm down, so not to disturb the collar bone. He slept better with the Tylenol, but we still couldn’t go home. We were also concerned because we hadn’t seen him pee in over a day.  So they told us to take the diaper off and let him get some air.  Sure enough within 10min he was peeing on my husband lol. They had to put my catheter back in because I couldn’t pee on the Saturday.

Catheter was out and I was peeing better again.  Zachary was off getting some more xrays and his hearing test done. He came back and we were told his lungs were clear, no more fluid. His jaundice level was normal as well. We were told to keep his arm bound down for 7 days so his collar bone could heal.  Our family doctor came by and said the same thing.  A public health nurse came by as well and then our nurse came by just after 12pm to go over any questions we may have and that we were free to go!

It wasn’t a pleasant experience, but we had our baby.  We left happy and nervous about starting our journey as parents. I ended up not being able to breast feed, nothing came.  So he was a formula fed baby.  I didn’t feel like much of a mom, but he got what he needed from the formula.

Today our son is 9 months old and the collar bone is fine and he is just growing like crazy! 22.1lbs and 30inches tall! 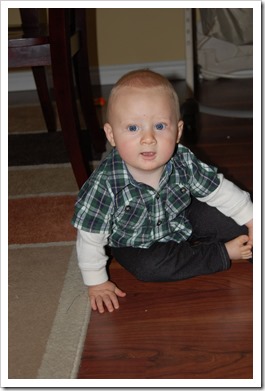 A big Thank-you to Catherine for sharing her story with us!